Among updates from the American Journal of Public Health, these caught my eye:

Tobacco control crusader Stan Glantz and colleagues comment on how people in the global tobacco control community have not only developed a consensus on the evidence, but figured out how to advocate for policies and actions that can reduce the public health of tobacco.
The Nature, Scope and Development of the Global Tobacco Control Epistemic Community

Bonus vocabulary lesson: ep·i·ste·mic/ˌepəˈstemik/ It means something to do with knowledge. In this case it refers to the body of scientific evidence that tobacco control experts developed and draw on.

There are a few reports relating to how fat we're getting. One draws a line connecting obesity in the United States and our poor showing on international measures of life expectancy. The researchers looked at how much longer people could expect to live once they reach middle age. Using 2006 data, they say obesity may slice almost two years off life expectancy for middle age Americans and that's a substantial part of the difference between the US and other countries. The article is Contribution of Obesity to International Differences in Life Expectancy.

Then  there is a re-examination of the effect of obesity in later life. Some reports have indicated that being fat may make less of a difference to life expectancy as we get older. But this analysis concludes that there might be a problem with how some researchers have used the data. The apparent diminishing effect might actually be a mirage caused by the fact that people in older generations aren't as fat as those in younger generations. So being obese in old age may be just as hazardous to your health as being fat when you are young. See Reexamining the Declining Effect of Age on Mortality Differentials Associated With Excess Body Mass: Evidence of Cohort Distortions in the United States.

And then an experiment in Australia concluded that PE classes in elementary school do a better job of keeping kids thinner if they are led by specialists rather than general classroom teachers. There was also some improvement seen in some measures of academic performance. Physical Education, Obesity, and Academic Achievement: A 2-Year Longitudinal Investigation of Australian Elementary School Children

Boyfriends and girlfriends deserve more attention than husbands and wives, at least in the circumstances addressed by a British study.

Imagine you are a local public health official trying to contain a sexually transmitted disease. When you find a case, which makes more of a difference: notifying spouses or other steady partners or tracking down casual hookups? These researchers say that based on their analysis of chlamydia cases, notifying casual partners was a more effective way of interrupting transmission. It takes more work, but the effort may be worth it.  Estimating the Likely Public Health Impact of Partner Notification for a Clinical Service: An Evidence-Based Algorithm

Posted by Andrew Holtz, MPH at 1:25 PM No comments:

There is a fascinating article on The Scientist web site about "Neurotransmitter-Regulated Immunity."

It reports on a pair of research articles delving into the relationship between our brains and our immune responses. The experiments were done on mice. Normally, I resist paying much attention to animal experiments, because they often turn out to not really tell us much about human health. But these research efforts are shining some light on basic mechanisms that could help explain phenomena that we've all seen play out in real life.

One of the most consistent observations in population health is that people in wealthier neighborhoods tend to be healthier and live longer than those in poor neighborhoods. What is particularly striking is that even after you take into account differences in lifestyle (smoking, physical activity, body weight) some of the discrepancies persist.

Then there is the data indicating that people with higher status jobs tend to be healthier than those at the bottom of the work hierarchy. Again, some of the difference persists even when researchers try to factor in lifestyle and other characteristics. It seems there is something about being at the top of the heap that translates into better health.

These health disparities are also seen in countries (Britain for example) that have universal health care coverage and where the differences in the kind of health care available to rich and poor are much less extreme than in the United States.

Along the same lines, researchers continue to investigate how racism itself might explain some of the health disparities between members of majority and minority communities.

Stress has been offered as one potential explanation for a link between social factors and physical health. Much of the attention has gone to corticosteroids. These naturally-occurring hormones (also distilled for use as medications) can sometimes suppress immune function.

The research discussed in The Scientist involves a different set of substances in our bodies, including acetylcholine and noradrenalin. The animal research indicated these neurotransmitters can affect how the immune system works.

Maybe it's another piece of the machinery that connects how we live, how we feel... and how likely we are to get sick and die.
Posted by Andrew Holtz, MPH at 3:41 PM 2 comments:

Blaming the Victim for Pedestrian Killings

I just came across a copy of a letter of mine the Oregonian newspaper printed earlier this year. I wrote it in response to an editorial that put a lot of the blame for a spike in pedestrian deaths on the pedestrians who died, largely absolving the drivers who killed them.

If we are to be less obese, less prone to diabetes and heart attacks, overall healthier, we have to make walking safer and more enjoyable. Endorsing the view that walking is inherently dangerous and that anyone who wants to walk rather than sit in a car does so at her or his own risk condemns us to an increasing cycle of inactivity, ill health and ever greater dependence on medicine to sustain us. 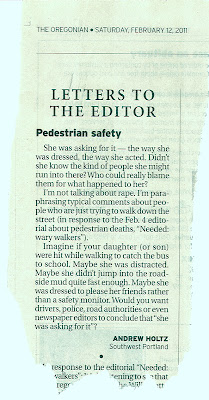 Text of my letter:

She was asking for it. The way she was dressed. The way she acted. Didn't she know the kind of people she might run into there? Who could really blame them for what happened to her?

I'm not talking about rape. I'm paraphrasing typical comments about people who are just trying to walk down the street.

Imagine your daughter (or son) were hit while walking to catch the bus to school. Maybe she was distracted. Maybe she didn't jump into the roadside mud quite fast enough. Maybe she was dressed to please her friends, rather than a safety monitor. Would you want drivers, police, road authorities or even newspaper editors to conclude that, “She was asking for it”?

Posted by Andrew Holtz, MPH at 3:11 PM No comments:

A Twist on Income Inequality & Health

A multitude of studies has found an association between income inequality and health; that is, in places where there is less of a gap between rich and poor, people tend to be healthier and live longer.

Here's where income inequality comes in. The researchers compared doctor salaries to the range of incomes in certain countries. One conclusion:

"High physician fees in the United States may reflect the cost of attracting skilled candidates to medicine in a society with a relatively more skewed income distribution."

In other words, since high income earners in the US do so much better than the average person here, doctors expect to get similarly big paychecks compared to people doing other jobs. In countries where there is less of a gap between the salaries of CEOs and line workers, doctors earn less on average... and that means health care doesn't cost as much.

When we debate health, the discussion often seems narrowly focused on what pills or procedures are available, or what's cooking in medical research labs. But medical science and clinical skills are not the whole story. This latest report illuminates one more way in which other factors, such as income inequality, influence health care and health.
Posted by Andrew Holtz, MPH at 1:13 PM No comments:

An Honest Reply to a PR Pitch... and the telling silence that followed

I received this impersonal pitch from a PR firm. I couldn't resist replying.
(Identifying information disguised because I'm a nice guy.)

I was hoping you could please provide me with your editorial calendar for the 2011-2012 year.
Please let me know if this is possible, thank you so much in advance.

Have a great day!

Dear Ms. S.....,
The editorial calendar is in flux. We would be pleased to see submissions related to the following topics:
I could go on, but I think you get the gist. I would be very interested in any leads on these and other related health topics.


Andrew Holtz, MPH
I'll let you know if I hear back from this PR company. Don't hold your breath.

Well, whaddya know... I did get a response, though I'm waiting to see if any substance follows.

Thank you so much for your help!

Well, it's been a month now. I've heard nothing more. Seems my journalistic interests and the marketing of their clients don't appear to match up. What a surprise.

Sad to say, though, I will bet they had more success elsewhere getting their messages placed. Sigh.

Posted by Andrew Holtz, MPH at 1:37 PM No comments: